You are here:Home » China Guides » Cities and Hotspots in China » Beijing – The Capitol in Middle Kindom » Sightseeing in Beijing » Forbidden City

For anyone who wants to experience Chinese history, a visit to the Forbidden City in Beijing is a must. The site is one of the best preserved medieval building complexes in the world and belongs to the UNESCO World Heritage. Welcome to the home of the last emperor , the ruler for 10,000 years….

In 1406, the construction of the Forbidden City began (also known as the Forbidden Purple City or in Chinese 故宫 Gùgōng ‘the Emperor’s palace’). The complex was commissioned by the third Ming emperor, Yongle, and built by the architect Chen Gui. According to tradition, at times more than 100,000 artisans and a total of up to a million workers were involved in the construction.  This incredibly large number of workers allowed the building to be completed in only 14 years. The Forbidden City was the home of twenty-four emperors during 491 years, from 1420 to 1911.  After the abdication of the last emperor in 1911, he and his family lived at the ‘Fasting Palace’ inside the complex up to 1924. Then they had to leave the Forbidden City and the site was opened to the public.

The whole site covers an area of 720,000 square meters.  All 890 buildings together provide a built-up area of 150,000 square meters, with a peripheral wall 3428 meters long. The palaces officially contain a total of 9999.5 rooms. According to legend, the emperor was allowed to have only this maximum number of rooms on earth –  only the ‘palace in the sky’, as the paradise in heaven was called, could have 10,000 rooms. Studies conducted by experts in historic buildings have made clear, however, that there is a total of only 8707 rooms in all palaces, halls and pavillons in the Forbidden City. But even this number is uniquely large worldwide for a so-called  ‘private residence’ of an emperor.

"All the doors have 81 nails, that is 9 rows of 9 nails each—except for the Donghua Gate, which only has 8 rows." 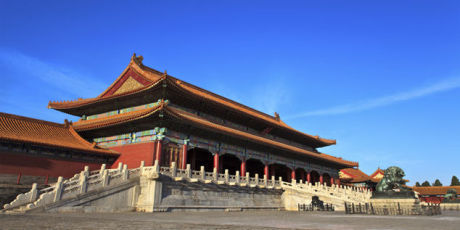 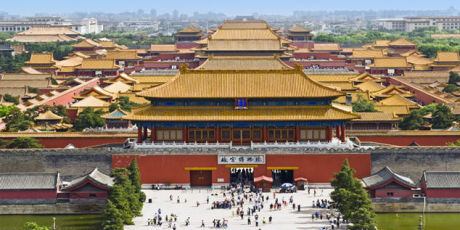 Construction of the buildings swallowed up vast amounts of wood.  This was mainly obtained from the Zhejing, Jiangxi, Hunan and Hubei provinces in southern China and was brought to Beijing via waterways.  Special roof tiles were also made:  the ‘golden tiles’ or ‘yellow tiles’ were named after the colour of the emperor.  These tiles were very hard, polished with tung oil to shine, and give a clear ringing sound when tapped on. The tiles were made in Sozhou and also brought via waterways to the Forbidden City. Even today, the roofs of the palaces or pavillons are covered with these tiles. They are still made according a traditional formula, since they must withstand extreme temperature variations and long winters. Industrially produced materials do not meet the strict requirements of the government.

The Forbidden City consists of an outer court and an inner court. Only the imperial family and their servants had access to the inner court. The most important hall in the outer court and in the entire complex is the Hall of Supreme Harmony (Tai He Dian). It was built in 1420, covers an area of 2400 square meters, and with 36.57 meters is the highest palace in the complex. No building in Beijing could be higher during the reign of the emperor. In this palace one also finds the dragon throne, the throne of the emperor, supported by two elephants symbolizing peace. For centuries, this hall was the place where the Chinese emperors ascended the throne and where all the important ceremonies like the emperor’s birthday und New Year celebrations were held.

The imperial family lived in the inner court, the so-called Neiting. It consists of three palaces: The Quanqinggong (Palace of Heavenly Purity), the Jiaotaidian (the Hall of Union) and the Kunninggong (the Palace of Earthly Tranquility). Others residents in the household were hundreds of court ladies and palace eunuchs. In addition, there were many other palaces, pavilions and smaller courtyards with special areas for the Empress and the concubines. Two more palaces were reserved for the emperor himself: the Fasting Palace and the Yangxindian, the Hall of Mental Cultivation. It was the private place for the emperor when he wanted to be alone.

The city has four main gates. Today’s entrance for visitors is the eight-meter-high Meridian Gate (Wumen). The Shenwuman, the ‘Gate of Divine Might’ is the northernmost gate of the entire imperial palace. There used to be a drum and a bell in the upper part of the gate tower that announced the time for the residents.

In front of the Palace of Supreme Harmony, there is a stone slab called the Imperial Way or the Yunlong Slab. This slab covers an area of more than fifty square meters and has a weight of 239 tons! This largest stone slab in China came from outside of Beijing, about 50 km from the Forbidden City. But how was such a large and heavy load transported? The Chinese builders devised something special: they waited for the winter, dug a well every 500 meters, and with the well water created an ice road for the transport. With this slippery surface, the stone could be moved within twenty-eight days. But 20,000 workers were still needed to move the slab along this track.

The dimensions in the Forbidden City follow certain rules, as for example with the pyramids in Egypt. The length and width of the ‘Hall of Supreme Harmony’ or the ‘Hall of Mental Cultivation’ are in a certain ratio, in this case nine to five. These figures were particularly important in ancient Chinese architecture. The odd and even numbers fall into the categories of Yin and Yang, the opposing elements system.  Among the odd numbers, nine is the highest number less then ten, and the middle of ten is five. And these numbers symbolized imperial power. Furthermore, many distances are designed with the exact value of the so-called golden section, which has a ratio of 0.618.

There are 13,844 dragon images in the Forbidden City.

All the doors have 81 nails, that is 9 rows of 9 nails each—except for the Donghua Gate, which only has 8 rows. Since coffins were also carried through this gate, the number of nails needed to be an even number, also known as a Yin number.

Beginning with the Qing Dynasty there was a law that in certain areas of the Forbidden City, no ‘real men’ were allowed to remain after sunset. This explains the former presence of up to 3000 eunuchs.

Those looking for old toilets will be disappointed: there was not a single toilet in the Forbidden City.  Instead, metal or wooden bed pans were used, with designs ranging from simple to very elegant depending on the user’s rank or affiliation. After use, they were covered with ashes and cleaned by the eunuchs.

During the Qing Dynasty, the smoking of tobacco and opium was widespread. A silk bag with a small pipe and tobacco was a typical gift for a child’s eighth birthday.

It can be very cold in Beijing.   Did people used to freeze in the winter? Absolutely not. In winter, the Forbidden City could be heated effectively.  So-called hollow walls were connected to pipes leading to ovens outside of the rooms. Even beds were heated this way. For little walks in the city the court ladies even had small pocket warmers. These were small vessels of bronze, filled with coal.

The emperor was able to select from forty different dishes for breakfast.  Not served from a menu, but already cooked and served in a palace. To guarantee the emperor’s safety, all the dishes were tasted by a servant first. Every dish also bore a silver spoon,  which would have indicated various poisons by discoloration.

Becoming a concubine was not easy. Not only did they have to conform to very specific height and weight guidelines – including toes, nose, length of arms, etc. – but they also had to be trained in various skills.  But most important: they had to smell good, and this without any aids. The court ladies made the inspection. It was a great disgrace not to pass this test. In this sense, today’s beauty contests could be considered very superficial!

The many bronze vats in the Forbidden City were not just for decoration – they were also waters tanks in case of fire. In winter, they were even heated from below to prevent the water from freezing.

Opera performances were very popular in the Forbidden City. But the performers lived dangerously: since most operas were stories about the emperors, every word had to be carefully considered. Some emperors were very strict in the interpretation of what was funny or not. Therefore, the consequences for the composers and performers could be quite drastic…

The golden lions in front of the imperial palace both had thirteen curls on their head.  This was the highest number, reserved only for the emperor. Other high-ranking politicians and dignitaries differed in the number of curls specified for the heads of the lions that they placed in front of their homes. With less then seven curls it was even forbidden to have a lion at the gate.