The Dragon Boat Festival, or Duanwu Festival, (端午节) is one of the most significant festivals celebrated in China. As it is with most of these festivals, many legends, customs and practices are tied to the Dragon Boat Festival. Being celebrated for more than 2.000 years, the festival is most noted and recognized for its educational purpose and influence and is held annually to commemorate Qu Yuan, a patriotic poet that lived 340-278 BC.

Furthermore, the festival serves as a means for the people of China to strengthen their bodies and to rid themselves of diseases. The following paragraphs will provide you with background information on the Dragon Boat Festival, as well as an overview of the customs and traditions tied to the festival. Finally, you will get some information on how Chinese people are celebrating the festival today.

The History of the Dragon Boat Festival:

The Legend of Qu Yuan

Alternative names: Duanwu Festival, Tuen Ng or Double Fifth Festival. In the early years of the Republic of China, it was also called “Poet’s Day”

Qu Yuan (340 – 278 BC) was a minister in the State of Chu, which was one of the Warring States Period during the Zhou Dynasty, and served in high offices. As the king decided to ally with the State of Qin, Qu Yuan changed sides and decided to fight against Qin, together with the State of Qi. However, he was slandered by an aristocrat and subsequently was exiled by the king with the accusation of treason.

Qu Yuan is most noted for his poetry, with which he shows his love and passion for his country. In 278 BC, after having finished his famous last poem Huai Sha (Embracing the Sand), legend has it, that he drowned himself in the Miluo River as a last sign of resistance against the occupation of the country by the State of Qin. Here are the last two paragraphs of that poem:

I must curb my rebelling pride and check my anger,
Restrain my heart, and force myself to bow.
I have met sorrow, but still will be unswerving;
I wish my resolution to be an example.

Along my road I will go, and in the north halt my journey.
But the day is dusky and turns towards the evening.
I will unlock my sorrow and ease my grief,
And end it all in the Great End. 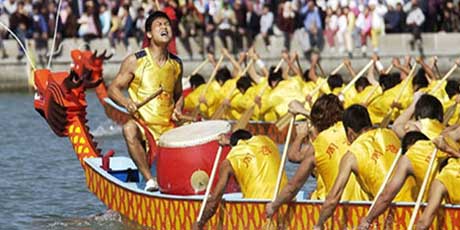 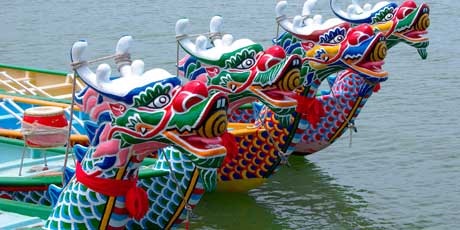 Bow of a Dragon Boat 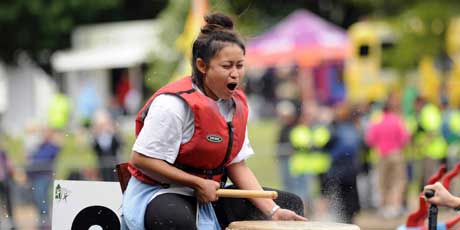 Drummer - the "heartbeat" of a Dragon Boat 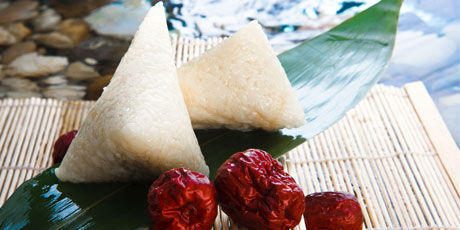 Furthermore, this legend tells that the local people, who loved and admired the poet, went out to search for him among the river in their fishing boats. Also, they kept throwing little balls of sticky rice into the river, so as to attract the fish to make sure they eat them instead of feasting on Qu Yuan’s body. Over the years, this became some sort of tradition to honor and commemorate the great poet.

As it is with many legends, some of the events might have happened accordingly whereas other parts are pure lore. Although the legend of Qu Yuan, as well as that of Wu Zixu (a royal adviser whose advice was ignored and who was subsequently forced to commit suicide; his body was thrown into the river on the fifth day of the fifth month, the same date as Qu Yuan’s death), are highly regarded among historians, there is another theory about the origins of the Dragon Boat Festival.

This theory is concerned with the deeply rooted worship of dragons among the Chinese. The two best known traditions, dragon boat racing and eating zongzi, can also be directed to this theory. The food is said to have been a traditional offering to the Dragon King, whereas the dragon boat racing is said to show reverence to the dragon, which can also be seen in the way the boats are decorated.

For whichever reason, either to commemorate patriotic figures or to show reverence to a dragon, the festival is a highly regarded social event, which has been honored for centuries and has become a national holiday.

Dragon boats are a human-powered watercraft. The boats are made from wood (traditionally teak wood, but today it varies) and come in different designs and sizes. The name “dragon boat” is derived from the design of said boats: the bow and the rear are rigged with decorative Chinese Dragon heads and tails. The gear is usually removed during training.

A typical crew consists of 20 paddlers sitting in pairs facing the bow. At the bow usually sits the drummer, who is considered the ‘heartbeat’ of the crew, meaning he bangs the drum synchronically with the rowing of the paddlers. While banging the drum, he gives orders, either via signals or voice calls. And finally, there is the steerer (or ‘sweep’), standing at the rear end of the boat. Although it is mandatory to have a drummer on board, should the drummer be absent for whatever reason, the sweep has to carry out the commands. There are also smaller crews, consisting of 10 paddlers, a drummer and a sweep, as well as traditional dragon boats with up to 80 paddlers, a drummer and a sweep.

Dragon boat racing goes as far back as the Olympic Games in ancient Greece. Both events share a combination of religious customs and practices and a celebrating community, as well as a sense of team spirit and fair competition.

As a competitive sport, the goal is, to reach a set destination before the other teams. The drummer is thus an important figure, as he makes sure the rowers keep in time with each other, as well as to maintain a sense of team spirit and morale. Legend has it, that the winning team will bring harvest and contentedness to its village. Today, dragon boat racing has emerged into modern times as an international sport, which was initially recognized in Hong Kong in 1976.